Blogging Revelations - the Ebook ... will start Where Biz Notes From Santa Ends ... with a revelation

December 01, 2010
Blogging Revelations - the Ebook ... will start Where Biz Notes From Santa Ends
with a revelation ... You can sink your teeth into. 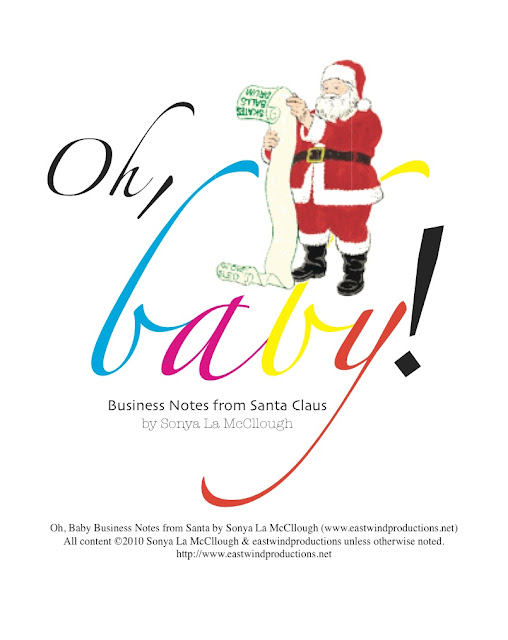 As a little girl I would cling to my Mother's side as she constructed garments for my sister, while everyone else was outside playing. After a few years of intentional study, I was allowed to sew, but to my surprise as well as my Mothers, I could do more than sew, I could make patterns to fit me out of newspaper! The seed of a fashion designer was planted and my Mother was the dirt that held it in. While in high school, I excelled in Art and Graphic Arts. I almost failed Home Economics, no surprise either, since our teacher wanted us to follow the guide sheet to the letter. Then came design school. The most important thing I learned from design school and many years in the fashion industry is to think ahead. So it's July in Tennessee and I'm thinking Christmas and If I were still in the fashion industry I would be at least two seasons behind.
As I started to think about business, Christmas and blogging, I began to see some distinct parallels (emphasizing the similarity or discrepancy between them) when I added Saint Nicholas to the mix. Having little confidence in my memory of the history of the jolly old elf, I soon learned through the power of the Internet that Mr. Nicholas went viral in the 17th Century when settlers arrived in New York with his story completely in tact. The true story of Santa Claus began with Saint Nicholas.  On St. Nicholas Day in 1809 Washington Irving published Knickerbockers' History of New York,  a satirical work of fiction. Irving's work was regarded as the "first notable work of imagination in the New World." Thus creating a legend. A Visit from St. Nicholas was written in 1822 by Clement Clarke Moore and is now know as The Night Before Christmas.
So, yes Santa is a legend, loosely based on the past life of a Saint. If you ask me as a business man, this Santa guy has got it going on. For one thing his story went viral more than two centuries ago and is alive and well today. As business men and women we can learn and implement most if not all of Santa's characteristic. As a business woman and Mother, I require sleep but this Santa guy is working (service) while everyone else is asleep. Although he is self employed, he still wears a uniform, even when he knows, most, likely will never see him. What can we say about Santa's focus? All of his focus is settled on one day, one event, Christmas. To him there is nothing else. Now let's examine his level of commitment. This is one committed, roof walking, chimney sliding  delivery man. When Santa arrives at this home, on a cold winters night, the joy and confidence of his work resonates and calms the Dad of the family. Santa's purpose is defined. Santa's purpose is concise. Santa's purpose is to deliver toys to children home's on the eve of December 25th by whatever means necessary. Santa shows up in spite of his age, unhealthy appearance and bad habit, no time for apologies, he's speechless as he works. A productive peddler. Santa is on a mission, one in which he encourages his transportation team to dash, dash faster, there is a sense of urgency in his voice as the them exist the property, yet Santa exclaims Merry Christmas to all and to all a good night.
This once hidden poem of Clement C. Moore has created countless joyful moments for many and many to come. This once hidden poem has inspired countless creative acts. This once hidden poem is an example of one effort multiplied to a power one is not able to quantify. All because of generous Saint Nicholas.
As creative business owners and bloggers, we have more to learn from this Santa story. We must consider evolution and time when growing our readership and craft. As the first settlers expanded the boundaries of the new world as they grew accustomed to the landscape and environment. We must follow their lead. We must consider blogging for an audience of one. You see in the original Santa Story we never, never see Santa visit but the one home. This unique visit. This single visit. This one visit. This audience of one, allows the world to participate, you see because where there ain't many, there is room for ONE more. This is one reason why, you never see blogs with huge readerships with counters.
Somebody always writing this Santa man a letter and here in the US our government  plays along (with taxpayer dollars) by enabling our federal postal services to collect letters. Santa is so embed in our culture he gets first dibs on editorial calendars and newspaper budgets.
As we all know, not everyone likes the jolly ole elf, because the jolly has a purpose and a platform and little LIKE buttons have no effect on his campaign or his mission. Toys will be delivered rather CNN, catches a glimpse of him or not. Ignore the LIKE buttons. This Santa story also inspired songs and one of the songs sings of Santa coming to town and checking a list, not once but twice. Facebook is growing, it will be there long after you have defined your niche, created products and generated your list of potential supporters.
In conclusion might I suggest that The Night Before Christmas is a business referral and Moore created this service guy Santa with solid business standards of the 18th century that are valid today.