Overcomer: A decade in review: A forty point high-light reel of  more than a survivor! #10yearchallenge 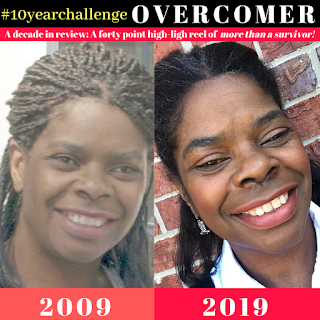 Ten years ago, I spent my days, designing stuff with words from the Bible. This photo was taken October 1, of 2009. Because of the steadfast love of Jesus Christ I since founded and created Key Word Bible Studies which include our signature product line aptly titled The One And Only Jesus.

As, a single Mother I felt the calling in July of 2008 to stay at home full time with my children. They needed me and I needed to personality take care of the gifts God had placed in my hands. So I did, so we did. My children are now twenty three and twenty and my oldest and her husband have made me a Grandmother. My Grandma name is Lala and y'all this little guy just loves the sometimes squeaky voice of his Mother's Mother. My youngest child attends college full time, works full time and lives that college life.

At one point, in the last ten years I became a married woman. Actually, we've been married for some time now. I care not to share too many dates and such online as the sanctity of marriage is of great interest to the deceiver. Nevertheless know we are still married and currently somewhat content.

The past ten years has been the most difficult decade in my entire life to date. I lost the home that I owned in 2011 and have not live in the same dwelling for more than eighteen months since. I've personally slept on more sofas in the past ten years than I can count. As a matter of record, I compiled my online notes of this particular time period into a book titled The Sanctuary of Sofa Surfing, Notes from the Wilderness.

The survey of the blogging landscape occupied  the better part of 2008 and I finally started blogging in 2009 as sonyamacdesigns. I owe much to Jesus and blogging as I soon remembered writing as a child. After experiencing some flooding in 2010, I later published my first magazine in less than forty- eight hours. I also spearheaded a wildly popular creative business plan marathon in early 2011. After the marathon I felt the Lord's calling to Women's Ministry and I began pursuing this effort with all of my person. After losing our home, my church began sheltering homeless women and children monthly in our Life Center and as The lead of the Women's Ministry this became part of my calling as well. We sheltered the women in our gym for almost a year and then we didn't. In August of 2012 I paid my way to one of those You Lead Conferences by Life Way Women. I had money to pay for the conference and my hotel room but transportation was an issue. So, I asked around and a ride to the conference was provided by the one and only Jesus. I road to the Knoxville conference with the head of The WMU and one of the founders of The Next Door. The woman from the next door saw me as a mentoring opportunity and ceased the weekend while encouraging me to write. Suddenly, to my surprise, I found myself eating dinner at the Leadership Table and seated by Chris. After much prayer, I quit the women's Ministry at church and began to pursue writing. I lost the lease on our place and me and my children moved in with my sister. I also met my husband, not long after. God blessed me and my children with our God Sized Dream House in February of 2013. I actually woke up for the first time in this house the morning of my fiftieth birthday.

At one point early on in this decade, the Lord compelled me to study Genesis 2:18 deeply. After, my deep study I found myself agreeing with the Lord completely in regard to marriage. I explained my beliefs to Jimmy and later, much later we married.

I attended Proverbs 31 She Speaks Conference in the summer of 2013. I Presented a book proposal for my book To Love A White Man and enjoyed the community of women. I road the Grey Hound Bus arrived early and stayed a few days after. One of those days was spent entirely at The Library of Billy Grahm and on the other day I attended Elevation Church with complete strangers, I met in the hotel. We all got Elevation T-shirts and I've never seen or heard from them sense.

The last Christian Women's Conference I attended was in celebration of Holley Gerth's Birthday, in 2014.